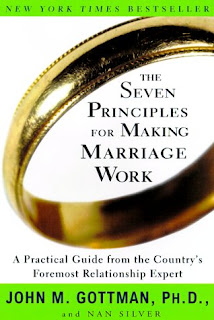 As part of our premarital counseling, Kara and I were instructed to read The Seven Principles For Making Marriage Work. As the book is based on Gottman's extensive marital research, I felt I could trust it more. A lot of what he said made since, but since we weren't married yet, I couldn't relate to all of it. With heading down to Costa Rica, one of our goals was to put concerted focus on our marriage, as it had taken on added stresses from our time in Seattle. We were reminded of the seven principles book, and brought it down with us to discuss on a weekly basis. Now that we have 2.5 years of marriage under our belt, it's a lot easier to relate with the concepts as we have first hand experience. It's helpful for me to write down the main points of what I read, and below are my notes for chapter 2: "How I Predict Divorce".

Gottman can predict divorce effectively when listening in on an disagreements, not because people argue, but the way they argue. He covers seven signs to look out for.

Harsh Startup
How the conversations starts is almost always how it will end. If it starts off with a load of negativity, then it wilil most likely end that way. If a harsh startup occurs, it's best to stop, take a break, and start over.

Q: Would I be able to recognize this and actually do it?

The Four Horseman
Negativity brings peril, and there are four ways to see this occuring.
Q: if you're not suppose to criticize, what do you do? Aren't some issues character issues?

Flooding
Flooding occurs when the negativity from one's spouse is so overwhelming, the you become shell-shocked. You feel so powerless, that just want an escape. Flooding actually kicks adrenaline in, brininging out the fight (more criticism, contempt, and/or defensiveness) or flee (stonewalling) response. When flooding occurs, the ability to think creatively, which is desperately needed in problem solving, goes out the window. A pattern of flooding makes it easier for flooding to occur in the future, as the person being flooded is hypersensitive to the triggers, and will be looking out for them. Frequent flooding also leads to distancing.

Q: how do you avoid flooding? Can you expect your spouse to let you know when the flooding is about to occur?

Body Language
Most of this sign was covered in the previous signs, but he did make an interesting statment that "the male cardiovascualr system remains more reactive than the female and slower to recover from stress" and that "men are more easily overwhelmed by marital conflict than their wives". As a result, it's generally the wife, who is better at handling stree, bringing up sensitive issues, and the husband, who is not so good at coping, avoiding getting into the subject. I wonder how true this is because I see it both ways.

Failed Repair Attempts
Repair attempts are efforts a couple make to descalate the tension couples face during a touchy discussions. They prevent flooding. I'm pretty sure they are discussed more in depth later on in the book. When the four horeseman rule though, repair attempts often don't get noticed, which only causes more criticism, contempt, and defensiveness, which causes more flodding, which only reducing one's ability to catch and acknowledge a repair attempt.

It's interesting to note that the quality of the repair attempt doesn't seem to matter too much. As long as the four horseman haven't moved in permanently, most any attempt shoudl be successful. A repair attempts success is much connected with the "positive setiment override" (which is discussed later in the book).

Bad Memories
Happy marriages look at the past with fondess, remembering the good that occurred. Even struggles are glorified, as it's a sense of pride for having weathered something difficult. For marriages that are steeped in negativity, history can be re-written. All of the things that didn't go well are recalled.

Summary
The marriage warning sings are:
Any of these suggest emotional separation, which leads to divorce or living two parallel lives.

Gottman use to focus on changing these negative things in couples. Instead found it was better too understand what right in happy marriages, and have people emulate that. The negative to be focused on, but rather on what to do right.
Posted by Steve Loeppky at 6:31 AM