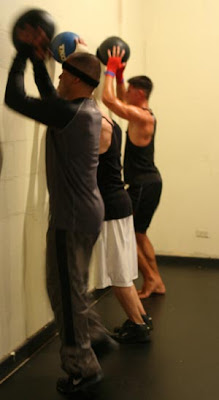 A couple of weeks ago, I went to Sun Peaks with my small group. Drew and John have a higher threshold for speed than I do and decided to race down Sting, a long, steep, and groomed run. At the bottom of the run, John said he'd gone "balls to the wall". I had never heard of the phrase before, but I got the message. He'd gone all out; few turns and a lot of pointing. When I got back, I looked up the history of the phrase, and found:

"Term used by pilots. When accelerating quickly, the throttle is pushed all the way to the panel and the throttle lever (ball) actually touches the panel (wall). Hence, balls to the wall." (source)

"The phrase is essentially the aeronautical equivalent of the automotive 'pedal to the metal.'" (source)

The phrase has rung through my head since. It paints a picture for me. The cool crisp air pelts my cheeks as I push faster down the hill. The skis are wobbly. A little lip can mean a lot of air. A thick snow clump could mean a major wipe out. Yes, balls to the wall, living on the edge, everything on the line, giving it all I've got.

Skiing balls to the wall on the slopes is great. Being given that description from others would be a real compliment. But how much more so if someone would look at my life and see me living balls to the wall for Christ. I'm challenged by this phrase; I haven't been living this way. I want God to push up the throttle. I want to be around people who have their throttle lever touching the panel. So how about you? Do you rally behind the phrase? Are you living it?
Posted by Steve Loeppky at 10:58 PM

Labels: balls to the wall, lent