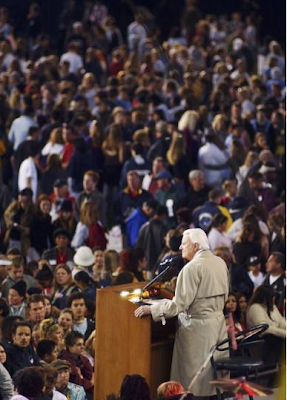 On 2/10, Kara and I went to the UW vs. UCLA basketball game. It was the best game of the season from my perspective. Every member of the team played well and we pulled out a nice upset.

Because it was a Sunday game with the #5 team in the country, there were some famous people in the crowd. Directly across from us was Kevin Durant of the Supersonics and a few seats down was Sean Alexander of the Seahawks. It was amazing to watch the response once people realized who were present. Kevin Durant had kids and adults backed up out into the lobby requesting autographs and/or cell phone pictures. Sean’s fate was similar. I remember thinking as a kid that autographs were cool, but that notion has long past. I felt sorry for them. It certainly an unwritten portion of those multi-million dollar contracts: the general public will flock to you, often interfering with you ability to enjoy.

Jesus’ interactions with crowds truly are amazing. He knew how to engage with them, but also how not be controlled by them. His mission of creating disciples was still purposefully carried out. In fast, the crowds were sometimes the training crowds for his disciples’ training. Jesus’ interactions with the crowds help me picture him more clearly as well. It helps bring out his humanity. It makes sense when Jesus asks people he has healed not tell others about what he has done. Jesus is trying to keep some crowd control. In taking on human flesh, he bound himself by time and space such that more people actual inhibited him. This is just one more willing limitation Christ took on in his mission to reconcile us to God...
Posted by Steve Loeppky at 10:44 PM