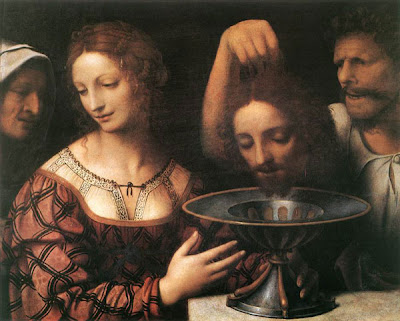 By going to Husky basketball games, one sees no shortage of pom squad or dance crew dances. Tonight’s great game against Arizona was no exception. I’ve always found these hard to watch. To appreciate something, I really have to focus in on it and absorb it. I admit my experience is relative, but these dances feel provocative in nature to me, so to study them with the goal of appreciating them is not healthy for the mind. As a result, I frequently just tune them out or may nominal attention at most.

Tonight, as the half-time dance show began, I started thinking about King Herod’s experience with dancers. Somehow, Herodias’ daughter (Herod’s brother’s wife’s daughter) pleased him so much that he made an oath to give her anything she wanted, up to half his kingdom. I tried to relate with Herod’s sentiment. I can’t recall ever being so pleased by something, that I would be will to give up have my possessions as a result. I know that seeing others dance has never struck that chord! I’m sure her dance must have been good, but it couldn’t have been that good. Certainly some other factors must have been at play (e.g. alcohol).

It’s natural to want to show appreciation or pay someone back who pleases us. There’s good ways of doing this, and bad ways. Herod’s open-ended offer certainly falls in the bad camp as it results in the heading of John the Baptist. The text reads that Herod was “greatly distressed” by the request for John’s head, but in the end he caved due to making a public oath before peers. I doubt that Herod honoring his oath in this case pleased God. His oath was made to another human (not to God like in Jephthah's case), so if any one should take the heat of his unwise words, it should have been him. Instead, following through with his oath caused Jesus to withdraw and mourn (Matthew 14:13). Ouch! How could wanting to show appreciation have such a poor outcome? I don’t know if this relates to everyday life much, but I certainly wouldn’t wish this one anyone.
Posted by Steve Loeppky at 12:12 AM